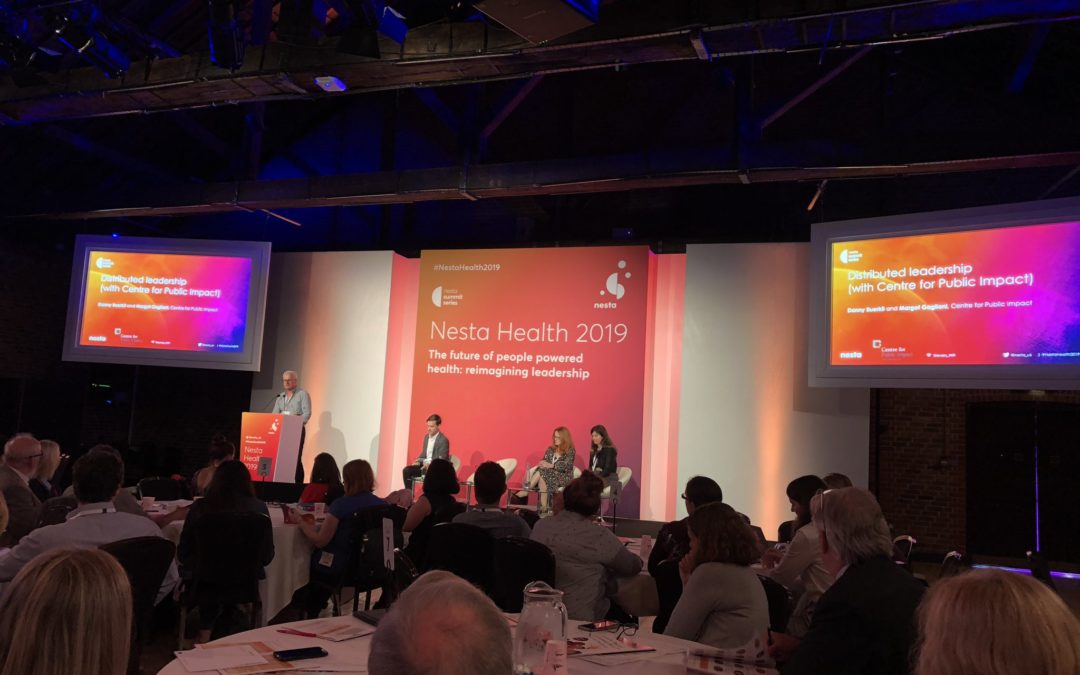 What does ‘leadership’ mean as we shift from treating people as passive recipients of health and care services to building communities that support us all to live the best lives we can?

That was the underlying theme – from my point of view, at least — of the highly stimulating Nesta conference on the Future of People-powered Health in London this week.

Nesta and the Centre for Public Impact were kind enough to invite Buurtzorg Britain & Ireland to take part in a session on distributed leadership, in which I facilitated a conversation between Charlotte Kirin and Wendy Lansdown and around 50 participants in the conference.

Wendy and Charlotte are members of one of the two self-managed teams we have supported as part of the Neighbourhood Cares initiative of Cambridgeshire County Council, which was the brainchild of Councillor Anna Bailey after I made a presentation about Buurtzorg to social care political leads in the east of England.

I understand Nesta will produce a report of the conference before long, but in terms of the distributed leadership theme we were exploring in the session, two key issues – and crucially their interdependence — emerged for me.

The first was expressed in the descriptions Wendy and Charlotte made of the creative work their team has done in Soham. Their examples vividly illustrated how self-management within the framework agreed with their employer had enabled them not only to provide leadership within their community but also – crucially – to facilitate others, in voluntary associations such as Men’s Shed, to do the same.

The second, however, relates to a trickier leadership challenge in organisations that wish to support such a shift from service delivery to community support. Enabling frontline leadership is the relatively easy part; the harder part is to repurpose organisations to support and serve it consistently well.

This has proved to be the main challenge in all the 20 or so public sector organisations around Britain we have supported to establish self-managed teams in health and social care, and I have written about it in the NHS before.

Some organisational leaders assume that the challenge of supporting self-managed frontline teams is simply a matter of devolving more authority to them. That is indeed one element and I salute leaders who have had the courage to do it.

However, those same leaders tend also to assume that otherwise their organisation can stay pretty much as it is, and that is a mistake. In reality, to provide self-managed teams with the support and service they need requires organisational repurposing with detailed implications for everything from HR policies to IT systems.

Does that challenge mean there is no point taking first steps, as Cambridgeshire has done so boldly and well? Of course not, but it is also important to address the implications over time, as my colleague Paul Jansen has discussed in a recent blog about Dutch experience.

We have now been working to introduce the Buurtzorg way to Britain and Ireland for about three years, and we take some pride in the amazing work done by many of the self-managed teams we have supported, as evidenced by independent evaluation.

But the truth is that, in the public sector, none of these initiatives has yet grown to scale, and we believe it is the organisational repurposing challenge that remains the biggest obstacle.

And we worry that even the most promising ‘test and learn’ initiatives cannot co-exist indefinitely with surrounding cultures and structures that were designed for command and control, not least because the potential financial savings will not be realised.

So we hope that our session at the Nesta conference, this blog and further work we have in the pipeline – watch this space! – will stimulate a wide conversation around one of the key lessons of our experience: to enable distributed leadership at scale demands not only freedom with responsibility for frontline professionals but also that their organisations support them with what they need and stop doing what they don’t!